Sitting here this evening, with the wind and rain hammering against the window behind me, it seems impossible that we had a cricket match yesterday evening – yet we did……

It was not a close affair:  Cornwood amassed 132 runs (net) in 20 overs, and restricted Buckland to just 10 runs (net) in the same number of overs – Cornwood won the fixture by 122 runs – an outstanding achievement!

To place the victory in context, however, Buckland were not an experienced side – but they persevered and held their heads up high all the way through – all credit to them.  In my opinion, one of the principal reasons for the margin of victory was the long term coaching opportunities for our players that have been taken by Cornwood CC both on Fridays in the summer, and over the winter months, by coaches who give up their own time.  Key figures like Andy Rickard, Chris Bowden, Josh Goodliffe, James Bowden, Owen Gannon, and Adam Talbott (who stepped in at the last minute again) – really this victory belongs to these chaps in part – those who weren’t there would be proud of the well drilled fielding side that took the field, and the batters that patiently wore down the Buckland attack.  Thank you all, and also to Nick Goodliffe who inspires us all, and took the time to come and see some of the game.

But it doesn’t happen unless the players perform on the day – and perform they did.  Seb Clewer was chosen to be Captain, and lost the toss.  We were invited to bat by Buckland, and the first pair was Lennon and Seb C.  Between them they took the net score to 11, but lost a couple of wickets in the process (so their score could have been 21….!).  One of our wickets was a run out, which, as stated in the last report, we can all but eradicate with experience.  But on a different note, in the whole innings our batters were bowled 4 times. Keeping the straight ones out, and shot selection, are something we will have to work on.  I thought that Lennon’s innings, scoring 9 with 6 scoring shots, was an absolute example of how to open an innings: good technique, push the ball into the gaps and firm calling.  This was against a couple of really good bowlers with a bit of pace, also.  The second pair were Barnaby and Ollie. And they took the score from 11 to 30 in a creditable partnership.  At this point – a welcome to Ollie Offer, in his debut in Hardball cricket.  He kept the ball out stoically for his 3 not out. Barnaby scored 6, but missed a couple of straight ones.  However, both batters took opportunities when they saw them, running the extra single on wides, byes or no balls, which helped their net score together.  With the score on 30 after 8 overs (just under 4 runs scored per over), Sam F and Seb G came to the crease.  The most consistently successful partnership in the team once again, the score rocketed from 30 to 68.  They scored at nearly 10 runs per over, and changed the overall innings run rate to over 5.5 runs per over.  The bowling gave up more extras than usual during this period, meaning that neither batsman was able to get bat on ball fully.  The final pair for the 16 over format were Stanley and Jarryd.  They brought the score from 68 to 96, partially through some extras, but partially by 3 lusty boundaries from Stanley.

That should have been it for the innings, but Buckland had an extra (9th) player turn out for the game and, rather than send her home, we agreed to extend the match to 20 overs.  Cornwood placed the last 2 batting pairs back in for a final 2 overs each before the close.  Our batters caused a fair amount of havoc in this period, with 5 boundaries being part of a 4 over period where Cornwood put on 38.  Stanley hit a 6, two 4s, a 3 and a 2 in the final 2 overs – poor Jarryd only faced one ball, but what a fine exhibition of batting at the death of the innings from Stanley – once more – 38 runs overall – well done!  Sam also hit out in the 18th over with a couple of boundaries, and finished with 22 without losing his wicket at all.  Seb G finished with a creditable 9 in support.

Buckland struggled with the bat. In fact the first scoring shot off the bat came in the 6th over, and there were only 23 runs scored off the bat overall in their innings.  That said – there was some really good bowling from Cornwood, with the exception of 4 wides and 4 no-balls in that same 6 over period.  In fact – we still haven’t yet got on top of the extras situation.  Extras totalled 51, with 24 in wides (we bowled 11 wides), and 19 in no-balls (we bowled 9 no-balls).  I put this down to perfectly understandable exuberance – but if we look after this slightly unseen aspect, we will really improve our situation even more.

So, who did we turn to, to be our 9th player, to match Bucklands team? Why, 7 year old Marriott Way, Lennons little brother, who just ‘happened’ to be with us in his cricket gear….. No better opening bowler, then.  Marriott proceeded to astound and delight the watching crowd – returning figures of 2 overs, no maidens, 3 wickets for 4 runs!!  He was fearless and bowled straight, the result being bowling 2 batters out.  The third wicket for Marriott was an absolutely outstanding diving catch by Seb C at mid-on – catch of the season so far – brilliant effort!  (Ed Lavers – you’d better come back soon to reclaim your catching slot…!)  Congratulations to Marriott Way on a wonderful, level headed bowling performance.  This also gave Barnaby some excellent on-field ‘commentary’ opportunities – Barnaby kept the fielders revved up in the field – good stuff.  Almost unnoticed, Seb G returned figures of 2 overs, 2 wickets for 4 runs, a fantastic performance – well done Seb G!  It took until the 14th over for Buckland to gain parity (i.e a positive score), and they finished on a score of (net) 10 runs.  So the best thing to do is to run through the bowling performances – Jarryd’s bowling is so much improved – his action improved out of all recognition from last year – I also noticed him going for accuracy rather than full pace – it paid off and Jarryd got really good figures of 2 overs for 8 runs.  Adam and I felt he was really unlucky not to get a wicket – so many near misses – keep at it Jarryd!  Who could ask for a better debut than Ollie Offer – 2 overs, one maiden, one wicket for 6 runs.  This included a wicket maiden!  Well done Ollie!  Lennon Way bowled a very unusual type of bowling:  left arm wrist spin. To have the courage to bowl this type, tweaking the ball with your wrist as it comes over the top, is a real quality, a split second out and you are either bowling the ball into the ground or over the wicket keeper’s head.  Lennon kept excellent control and returned figures of 2 overs, 1 maiden, 1 wicket for 6 runs.  This also included a wicket maiden!  Outstanding! Incidentally – Lennon showed the Way in the field with committed fielding, accurate throwing and great backing-up.  Barnaby kept wicket in the first half, and Seb G in the second half of the Buckland innings.  Barnaby let through no byes whatsoever, and Seb only 7 – a really improving picture – well done to the stumpers! In fact both Barnaby and Seb G can both be proud of efficient work in bringing about a run-out apiece, Barnaby as a bowler, from the bowlers end, and Seb with a quick-thinking Joss Buttler style run out as wicket keeper – great work Both!  With the ball Seb Clewer on occasion strayed into no-ball territory, but with control is a threatening bowler – he bowled one batter out and returned figures of 1 wkt for 20 runs in his 3 overs.  Sam Ford, not content with his performance with the bat, bowled 2 overs of genuine pace, taking 1 wicket for 8 runs in his 2 overs.  The wicket he took though, was textbook ‘take out the top of middle and off stump’ material – Stuart Broad would have been proud of it!  Cartwheeling stumps next year I think….

Once again I have left Stanley Baker until towards the end.  Bowling figures of 3 overs, 1 maiden, 5 wickets for 6 runs speak for themselves and need little inane comment from someone like me, but the thing that I personally will not forget is the hattrick that delivered the first 3 wickets.  The first wicket was a tidy caught and bowled, and then he rattled the stumps in the two balls after.  Not many bowlers, myself included, can boast a hattrick – congratulations Stanley, aside from your immense batting score of 33 you can say that you have achieved a significant cricket milestone.  Well done!

On the subject of hattricks……. perhaps I should drop into the conversation that Marriott Way took a wicket with each of his last 2 balls yesterday…. – this leaves him on a hattrick!  Good luck Marriott – and select who you bowl your next match ball to very carefully….!

So, to look at our bowling performance – we took 15 wickets – 10 Bowled (brilliant -well done – they miss you hit!) – one caught and bowled, Seb C’s fantastic catch, and 3 run-outs (I failed to mention Stanley’s great run out!).  I’m particularly pleased with the 3 run outs – the fielders walked in, were attentive, encouraged the bowlers, backed up, and were always looking for opportunities. All this, and expecting that the ball is always going to come to you  is great and is the basis of a really good team.  However – we have to learn how to Appeal!  Training on Friday……..!

Player of the game was really difficult to select – but in the opinion of Adam and I, notwithstanding some characteristic outstanding performances, for his fielding, courage when bowling and technically sound leadership with the bat, Lennon Way was our Player of the Game. Richly deserved Lennon – well done!

So I think that the weather system at the window will soon pass,  I’ve been typing that long!  But on this occasion, there was a lot of good stuff to type about!  The team are really improving, and I’m already looking forward to the next fixture.

Dates for the diary:

Please let me know your availability via the TEAMER App

Later….(may or may not happen)

– I am seeking a third attempt for the Plymouth Peverell fixture

Well – that’s all for now.  Hopefully – weather permitting – see you all at practice. 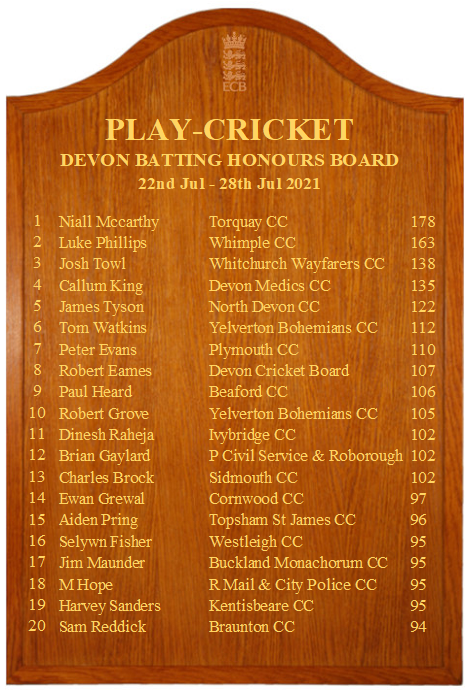