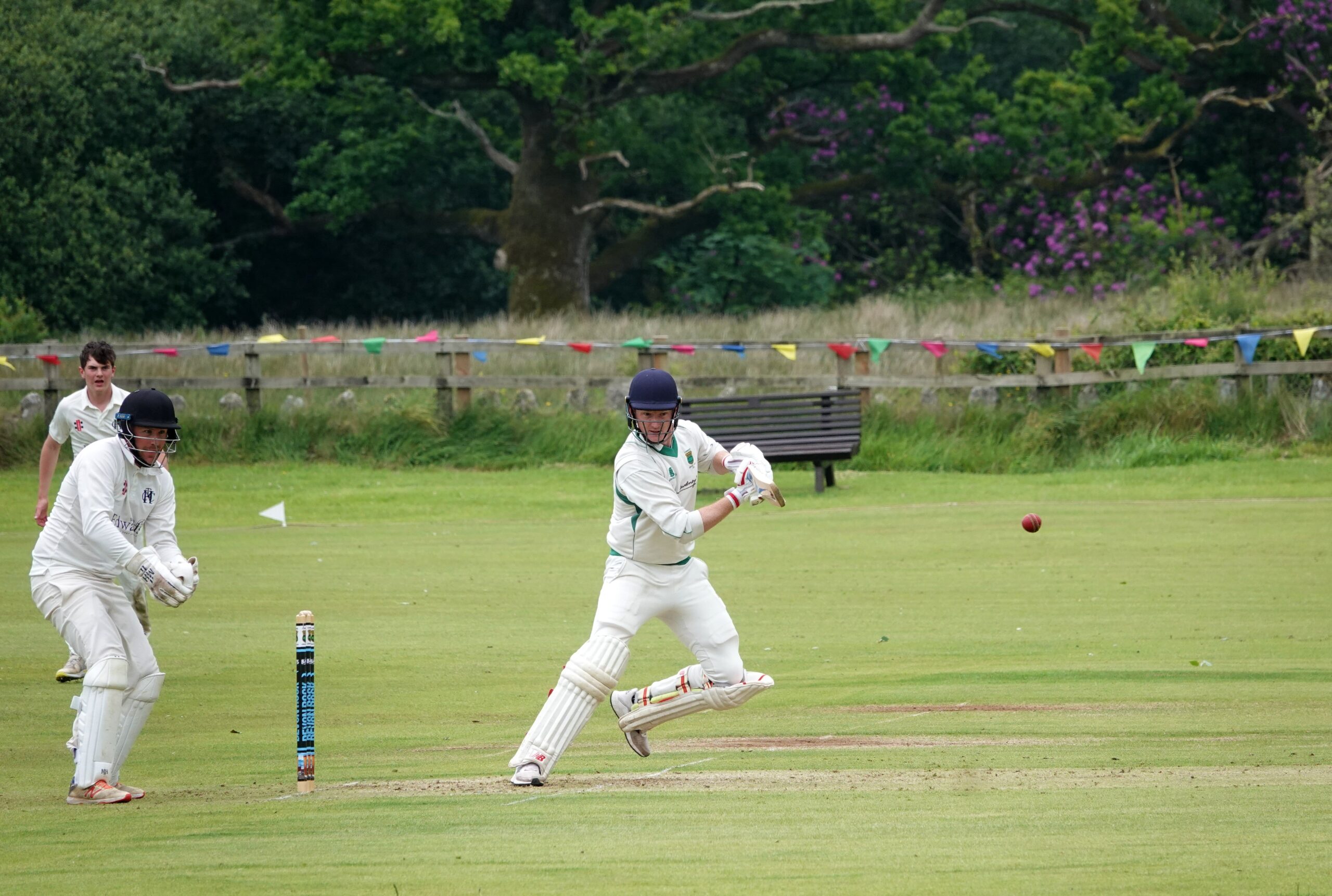 A packed Oak Park had a beautiful buzz on Saturday. Resplendent with bunting, the ground looked worthy of the Jubilee occasion. Fun was on offer for the family including the Queens Knickers and the Human Fruit Machine and there was something too for the adults with a keg of Dartmoor ale.

Morning rain threatened to play its natural bank holiday game throughout the day but was blown westward to ensure a full slate of matches could be completed.

Even with all the available attractions, by the end of the evening all eyes on the ground were
absorbed in the cricket as the Ones came just shy of a jubilee win in the Premier League over
Heathcoat.

The visitors are the class of the county at the moment, having won the Premier title in 2019 and 2021 and entering the game unbeaten through May. Their bowling attack is arguably the
fiercest in Devon; good enough to bowl Sidmouth, Bovey Tracey and Plymouth out for a combined 257 runs in the previous 3 weeks. In a match reduced to 45 overs by weather, Heathcoat won the toss and elected to field. Despite an early run out, the Ones made solid progress led by an impressive knock from opener Max Finzel.

Max is the first batter this season to reach 50 against the Heathcoat attack, reaching the mark in 87 balls before pushing onto 62.

His 3rd wicket partnership of 74 with Elliott Staddon (35) was then backbone of the innings as the team reached 126-3 with eleven and a half overs to go. The honours in the last part of the Ones innings were even, as Matthew Skeemer lead the charge with a run a ball 36, while Heathcoat picked up regular wickets at the other end. Jamie Drew was the pick of the Heathcoat bowlers with figures of 9-0-35-3 and the Ones set a defendable total of 186-9 in their 45 overs.

Heathcoat started fast in their reply, with their captain Peter Randerson attacking Cornwood’s
opening bowlers on his way to an ominous 35 in 30 balls. The Ones have the experience to apply the brakes and they were able to pull their way back into the contest. At 79 for 4 after 21 overs, Heathcoat were still a long way away from victory. It was a match that needed senior players to put their hands up and they did. Matthew Skeemer spearheaded the bowling with figures of 9-0-24-3 and Adam Goodliffe came back strong to pick up two middle order wickets.

When the seventh wicket fell on 143, Heathcoat still needed 44 from the last 50 balls. Middle order batter Simon Sobczak steered the visitors home with a ball to spare through a mature, calculated chase making 56* from 92 balls. Frustration and disappointment for the Ones then, as they left the match with the same 6 points they would have got if it had carried on raining and find themselves joint Seventh in the league. The wider picture though is the Ones have much to be optimistic about. They pushed the best team in Devon to the wire, and there are only 8 points separating 5 teams in the middle of the Premier League.

The Twos visited Teignmouth and Shaldon under battleship grey skies with the occasional flyover from a Lancaster Bomber or Chinook on the way to the English Riviera Air Show. With a military flavour to the day, and the Top Gun revival in full flight, the hosts provided a track that felt the need for speed. Five balls of spin were bowled in 59.5 match overs on a track with bounce. Put in by a host team undefeated through May, the Twos battled to a score of 133. James Richardson top scored with 25 before being unlucky to play on to Ross Abraham (5-1-15-3) and others got encouraging starts. Some lower order hitting helped, including a six from Josh Goodliffe that went high enough to trouble any passing traffic on route to the air show.

Needing three an over, Teignmouth & Shaldon set about their chase aiming to go at sevens and eights. They made a knock-em-down sling-em-out bar fight out of the match. To borrow Nick Goodliffe’s baggy cap and a little Sean Connery from The Untouchables; Teignmouth brought bats, The Twos brought pace.

Teignmouth sent one of ours over the trees, The Twos sent one of theirs
back to the hutch. Wickets started tumbling and momentum was swinging the Twos way.
Teignmouth’s keeper, Joshua Couch, threatened with 21 before being removed by a world class gully catch from captain Ben Griffiths. One handed, mid air, reaching instinctively behind him for a well timed cut; you will not see a better catch this season. It was Collingwood quality and Couch stood his ground for half a minute in disbelief.

That was the first of 4 wickets for Josh Goodliffe (6-0-23-4) as
Teignmouth’s best hope, Karl Blackburn, ran out of partners before succumbing himself. The Twos claimed another comeback win by 25 runs and climb to 6th in C Division West.

In the battle for sole ownership of second place in F Division West with Ashburton 2nd XI, The Threes looked convincing again with their fourth win out of five. Travelling to Ashburton, the Threes won the toss and put the hosts into bat. Varwell Field is a track that rewards good batting and Phillip Pascoe (88) and Marcus West (74) put on 130 for the second wicket on the way to 181-3.

Josh Cumberland was the pick of the Threes bowlers with 6-1-19-2. Josh Wood lead the Threes response falling one short of his 50. A crucial 46 partnership between Jonathan Way (30) and Joe Davies, combined with a cameo of 19* for Alex Passman saw the Threes home with 2 wickets and 11 balls to spare.

Back at home base, the Fours were comfortably second place in the Delamore Park Jubilee
Steeplechase against South Brent 1XI. There were 20s for Jon Lambert, Nathan Parsons and Phil Gibson as the Fours reaching 142 in 37 overs after being put in. Rob Kidney did the damage for the bowling side taking 4 for 24. The Fours were able to claim three early wickets, but South Brent were strong and reached the winning post with 15 overs to spare. The Fours stay 8th in their league, a point above the relegation zone.

Next week, the Ones take the long trip up the A386 to bottom of the league Hatherleigh. The Twos welcome Stoke Gabriel 1XI to Oak Park. The Threes keep pushing for top spot in their league as South Devon 2XI come to Delamore Park and The Fours travel to Stoke Gabriel for a tussle with their Second XI. Sunday sees the start of the Women’s Ones league campaign with Oak Park hosting their game against Bradninch. As a reminder for the Badgers amongst us, Jay Bista’s Uttarakhand side start their Ranji Trophy Quarter Final against Mumbai on Monday. Cricinfo’s preview is here https://www.espncricinfo.com/story/ranji-trophy-knockouts-uttar-pradesh-bank-on-ipl-stars-punjab-depend-on-young-core-1318221 and the match centre is https://www.espncricinfo.com/series/ranji-trophy-2021-22-2022-1280196/mumbai-vs-uttarakhand-2nd-quarter-final-1313304/live-cricket-score 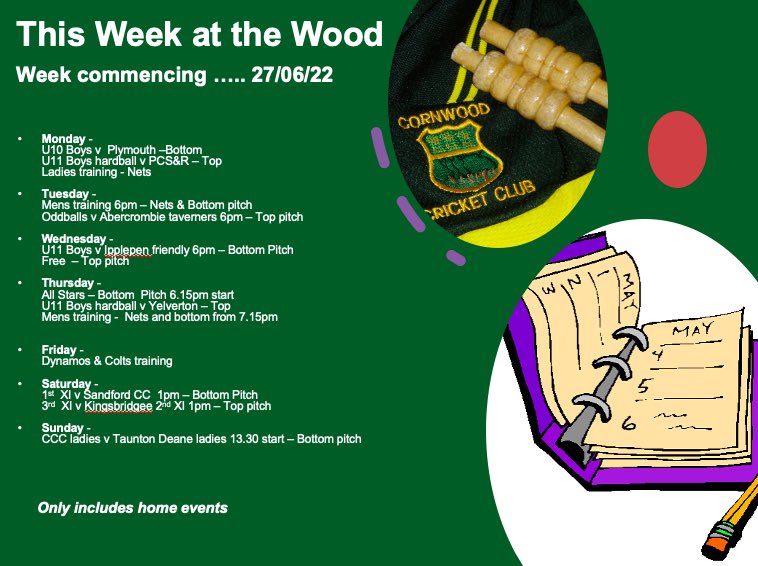